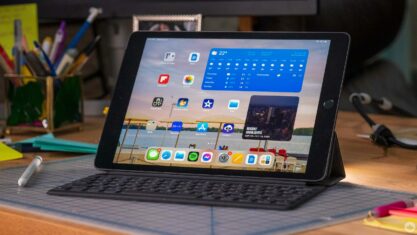 Out of nearly all of Apple’s current products, the entry-level iPad is likely the most overdue for an update.

According to 9to5Mac’s sources, the next entry-level iPad will feature Apple’s A14 Bionic Chip, 5G and a USB-C port. The tablet has remained pretty much the same for the last few generations, with processor updates being the only exception.

If this report is accurate, Apple’s entire lineup will soon feature USB-C, including the iPad Pro, iPad Air and even the iPad mini.

9to5Mac states that the entry-level iPad will also feature a display that offers the same resolution as the iPad Air’s screen. While the current 9th-gen iPad’s display measures 10.2 inches, the new entry-level iPad could feature a 10.5-inch or 10.9-inch screen, according to the report.

It’s unclear if Apple will also update the entry-level iPad’s design with the more squared-off look the rest of the tablet lineup now offers. Given how ancient the current entry-level iPad looks, I certainly hope Apple opts to refresh the tablet’s design on some level. The iPad also seems to likely still feature a physical Touch ID button.

Later this year, Apple is expected to release a new iPad Pro equipped with an M2 processor, the same chip featured in the recently revealed MacBook Air.