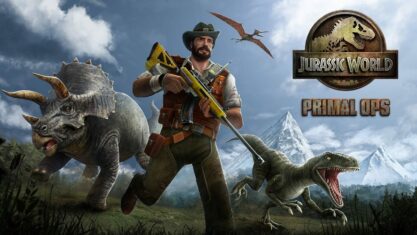 Montreal-based Behaviour Interactive’s Jurassic World Primal Ops is entering a soft launch phase ahead of its full release. In Canada, players can download the free-to-play game on the App Store and Google Play Store.

Jurassic World Primal Ops is a top-down action-adventure game based on the long-running dino-centric franchise. Players take on the role of a dinosaur handler who must save dinosaurs from mercenaries, poachers, and other threats.

To help fight back the threats, players collect and team up with a roster of dinosaurs to complete objectives while travelling North America. The game features a ranking system for each dinosaur species. Players can rank them and level them up. In turn, these dinosaurs join players as companions in-game

From now until June 24th, Canadian players can jump into the game and gain access to an in-game event. During which, players take on the powerful T. rex.

Currently, Behaviour Interactive states that Jurassic World Primal Ops is due to arrive worldwide “soon.” However, pre-registration for the game is available now. Those who pre-register are able to unlock exclusive in-game items available at launch.

2 hours ago Editor
All News