Here’s how to watch the Stanley Cup final in Canada 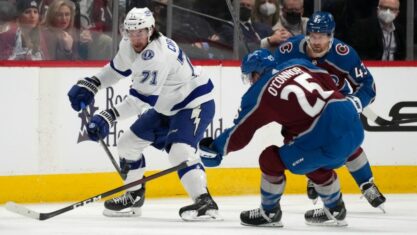 The Stanley Cup Final between the Colorado Avalanche and the defending champions Tampa Bay Lightning is set to kick off on Wednesday, June 15th, with both the teams looking to bring home the cup for the third time.

In Canada, the games would be broadcasted live on Sportsnet Now, CBC and TVA Sports, alongside all the latest NHL news across sportsnet.ca, the Sportsnet App and Sportsnet’s YouTube, Instagram, Twitter and Facebook channels.

Check out the game schedule below:

You can catch all the action on Sportsnet’s SN Now, which offers a monthly subscription for $14.99, and gives you access to stream the NHL, MLB, NBA and more. Alternatively, Sportsnet Now is available through select TV service providers, including Rogers, Shaw, Telus, Bell, Source, Cogeco and SaskTel. Simply head to the SN Now website and click on “Sign in with your TV Provider.” Select your specific TV provider and log in with your credentials to access SN Now at no extra cost.

Similarly, Videotron, Cogeco, Telus, Cooptel, RTC and CCAP subscribers can access the live games on TVA Sports. You can use your cable credentials to log into the TVA Sports website and mobile apps to live stream the two teams battle it out.

TVA Sports’ app can be downloaded on Android here and iOS here.

CBC is a part of CRTC’s mandatory distribution list, which means, if you have cable, you can access the games directly on the CBC channel at 8pm ET on all the game days.