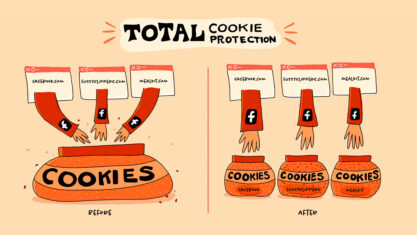 Mozilla announced that it will start rolling out its ‘Total Cookie Protection’ (TCP) feature by default to all desktop Firefox users worldwide.

This approach to cookies makes it more difficult for trackers to link user activity across websites:

Mozilla says that TCP helps prevent the worst privacy problems of third-party cookies while also allowing those cookies to fulfill some less invasive use cases, such as analytics.

However, Firefox isn’t the only browser taking on third-party cookies. Google previously announced plans to phase out third-party cookies in Chrome but has delayed the move until 2023. Apple’s Safari also offers ‘Intelligent Tracking Prevention’ that helps prevent cross-site tracking.

TCP was first made available in Firefox back in May as an opt-in feature while Mozilla tested it. Today’s announcement will shift the feature from opt-in to on-by-default, which is a big step forward.

Unfortunately, not all Firefox users will have TCP. Notably, mobile versions of the Firefox browser don’t have TCP — at least, for now. Mozilla’s chief security officer, Marshall Erwin, told The Verge that there’s a different timeline for bringing TCP to Firefox on Android. TCP is available on ‘Firefox Focus,’ a version of mobile Firefox that’s all about privacy. However, Erwin also noted that Firefox users on iOS won’t be able to use TCP, citing Apple’s restriction that forces iOS web browsers to use the WebKit browser engine (the same one used by Safari).

TCP will be available in the latest version of Firefox, although it seems unclear how users will be able to verify if the feature is enabled. Previously, users who were invited to test TCP could check whether it was enabled by heading to Settings > Privacy & Security > Enhanced Tracking Protection. Although I’m running the latest version of Firefox, I wasn’t able to find TCP in my settings, although perhaps I’ve jumped the gun on checking since Mozilla only just announced the rollout.

You can learn more about how TCP works here.

Source: Mozilla Via: The Verge