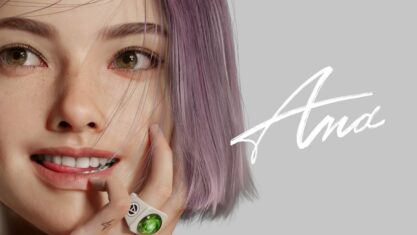 The goal behind the “hyper-realistic” avatar is to “help establish” Krafton’s web3 ecosystem. Interestingly, Ana was created using Unreal, the development engine owned by Epic Games, the maker of PUBG rival Fortnite. While the companies have had legal disputes in the past, it makes sense that Krafton would want to use Unreal, given its ubiquity and, specifically, its tool for creating realistic digital characters.

Krafton says Ana features “highly-advanced face rigging technology” that “delicately expresses the movement of the pupil, fine facial muscles and wrinkles, and enables the natural joint movement across the entire body.” Meanwhile, “deep learning technologies” like “advanced voice synthesis” have been used to “create an artificial intelligent voice for ANA so she can act and sing just like a real human.”

It’s unclear exactly how Ana will be used by Krafton for web3 purposes, although it’s easy to see how it may be leveraged for promoting blockchain and NFT-related efforts. In a press statement, Krafton simply said it expects Ana to “attract the interest and popularity of Gen Z around the world,” which it will do, in part, through an “original music track” and other influencer activity across the field of entertainment.

While many gamers probably don’t care about any of this and just want to actually play games, Krafton is also, thankfully, working on a new title. Once planned to be set in the PUBG universe, Krafton’s The Callisto Protocol, a new survival horror game from the creators of Dead Space, will release on PlayStation 4/5, Xbox One, Xbox Series X/S and PC on December 2nd, 2022.